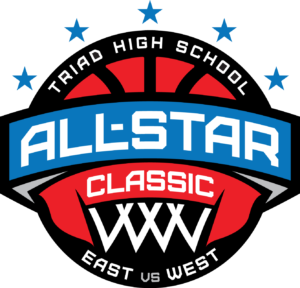 The competition will begin with the girls and then the boys. They will compete in a two-round timed “obstacle course” event consisting of dribbling, passing and shooting stations. There will be two rounds of competition – the three (3) boy and girl players with the fastest times from the first round advance to the finals.The players will be timed on a clock starting at 00:00.0. The clock stops when the final shot is made. (Start is on the PA announcer saying “go” and the stop is on the final made lay-up.) The players must observe basic ball-handling rules while completing the course. 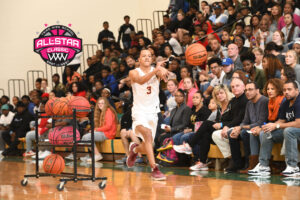 The three passing and the “top of the key” shooting challenges are considered completed (player can move on) when he/she either 1) successfully hits the target/makes the shot or 2) exhausts the corresponding rack of balls at the target/basket. For the opening lay-up and the final shot, the player must rebound his/her own ball until the basket is made. In the case of a tie in either round (times will be to the tenth of a second), the tied players will repeat the course. Players are subject to disqualification (at the final discretion and judgment of the referee) for failure to attempt all of the challenges as they are designed and intended to be completed. Order of competition in the finals is determined by inverse order of first round times. There are no “time penalty”.

There are two (2) rounds of shooting. Scoring is not cumulative. The competition will begin first with the girls and then the boys. Five (5) stations are positioned around the three-point line, with four (4) brown balls and one (1) red, white, and blue ball at each station. Each player must start at the baseline station with their hand on the first ball. Each participant has one (1) minute to shoot the 25 basketballs. The player must shoot from all five (5) positions, as time allows. 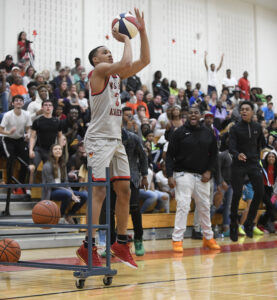 Each basket made with a brown ball is worth one (1) point. Each basket made with a multi-colored ball is worth two (2) points. The multi-colored ball may be shot only after all four (4) brown balls are shot from the station.
In the event of a tie, the tied players will each have one (1) minute to shoot as many balls as possible. Of the first round participants for each the boys and girls, the top three (3) will move on to the final round. Order of competition in the finals is determined by inverse order of first round scores. 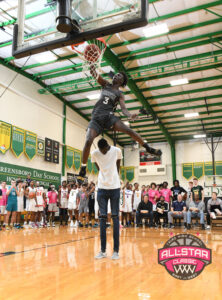 Contestants will have 45 seconds to receive a score on the attempts. If the player does not complete any dunk attempts during his 45 seconds, he is given a score of zero (0). A dunk attempt is when a participant attacks the basket with the basketball and makes a controlled motion at the rim. The referee will make the final call.